Old vintage amplifiers were hand-made from discrete components with open-ended connections because the PCB technology was still undeveloped at that time. For example the amplifiers of the early 60's were so expensive that only a few bands had possibility to buy them even in America. Because of this the amplifier manufacturers added several channels to the amps like own channels for microphones and instruments so that several band players could play through the same amp.

At least the following connectionways have been used

The first amplifiers were real point-to-point devices where the components were directly coupled to the tube pins and pot straps and chassis-mounted terminal strips without any regularity but following the signal way. Often in such old connections there is room for improvement in electrical safety but those amp have worked surprisingly well for decades. The connections are easily modifiable. 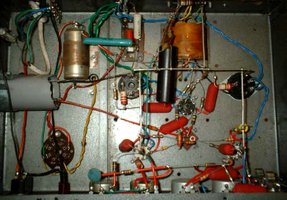 Point-To-Point using a board

This type of connection became common in the early 60's and is more controllable than the previous one but at the same time more wiring is needed. For the connection can be used tagboards, eyelet boards or turret boards. This coupling technology is a very durable solution and the connections are easily modifiable.

This term is used when selling expensive boutique amps and even if they are not real p2p-amplifiers they have certain advantages. The coupling boards which are industrially manufactured are some kind of mix of a PCB and a turret board i.e. there are fixed turrets attached to a circuit board on which separate components are connected. The advantage of this solution is that the components can be easily changed and the most important thing is that the pots are chassis mounted model and the tubes stay on the chassis mounted sockets. There are however certain limitations what comes to the modification. 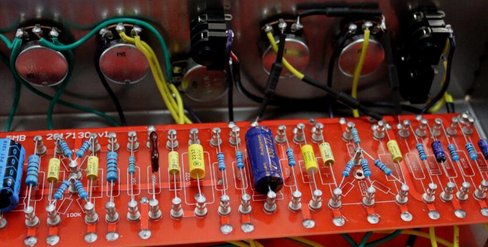 This way began to become more common in the late 60's and early 70's which also dropped the prices of the amplifiers. Japanese manufacturers came on the market and forced competitors to adapt and optimize their manufacturing techniques. In the first circuit board models circuit is connected on the board  but the pots tubes and filter capacitors are located outside the board giving room for some kind of modifications. Also the first PCBs have stronger foils which make soldering possible.

Nowadays almost all the new low cost amplifiers including reissue models have been implemented on PCBs up to the last draw which means that the pots and tube sockets are integrated into the board. What comes to modifications this is a nightmare since for instance a  change of one pot causes a massive operation which is also a risk. Besides this the foils are so thin and close together that soldering is no longer possible. Some smaller mods can be done by using component legs case by case. Furthermore many components (pots, switches, LEDs ...) are often the manufacturer's own production and are hard to find. These models have been added for example a lot of semiconductors whose renewal is difficult.

Why to choose a point-to-point-amp

The point-to-point amplifiers sound great. This is of course a subjective opinion although I am not alone with that. Based on my experience I can say that when the old circuit board has been replaced with a corresponding  p2p board the difference is  significant what comes to the sound, disturbance level and dynamics even if the same transformers were used. Circuit board foils conducts worse than the copper wires,  there are capacitances (due to structure) and the components are often low cost production. The conductivity is quite different for example when the ground bus is made of 1.5 mm2 of copper instead of a 0.1 mm strong foil. The hand made solder joint is stronger and  better than a machine made. A wood cabinet sounds better than a chipboard cabinet.

All of those factors above affect definitely the sound.

Choosing an amplifier model that is p2p-coupled has many advantages that make a choice in a long run cheaper. All amplifiers will need some changes sooner or later either by the user's will or because of faults. Many of the integrated low cost models are problematic because their repair is more expensive and big modifications are impossible without doing a completely rebuilt. Point-To-Point is the Point!